It's 2019 and the NZ emissions trading scheme is still over-allocating free emissions units to high emitting industries instead of just making them pay for 100% of their emissions. I reference the No Right Turn blog and do some open data with the 2018 free allocation of units.

On 31 July, the indefatigable Idiot/Savant of No Right Turn blog reported that the Government had decided to start a very gradual phase-out of 'free allocation' of emissions units to industrial emitters under the emissions trading scheme.

Now for a reminder about the context, revisit this post NZ Aluminium Smelters Ltd and their free allocations of NZETS units - carbon price or carbon insurance policy?. There I summarise all my many posts about excessive over-allocation of emissions units to emitters under the NZETS.

"And when you do the maths, it means the government will still be subsidising highly intensive industrial polluters by 20% of their emissions in 2050, the year we're supposed to be at net-zero emissions. This is bullshit, simply bullshit. And it is bullshit neither the country nor the planet can afford".

I agree with him. This is just an appalling policy. Every emission unit given for free to an emitter is a right to emit one tonne of greenhouse gases. Its a voucher for pollution. It's worse than that, it's an instruction to pollute. Every unit allocated represents a blunting of the price incentive to reduce emissions. It's exactly the same as the Government giving the emitters petrol (or coal) vouchers paid for by the taxpayer. I am amazed that James Shaw can even put his name to this policy.

Idiot/Savant is the only blogger, or commentator for that matter, in New Zealand, who is regularly providing hard analysis of climate change and emissions trading scheme policy. In a further post, he looks at how the free industrial allocation of units will benefit New Zealand's largest industrial emitters; New Zealand Steel, New Zealand Aluminum Smelters Ltd, Ballance Agri-Nutrients (Urea) and Methanex (methanol).

In this post, I am going to go through the steps to obtain the latest data, for the 2018 calendar year, of free allocation of emissions units from the webpage of the NZ Environmental Protection Authority. And then upload it to Google sheets. 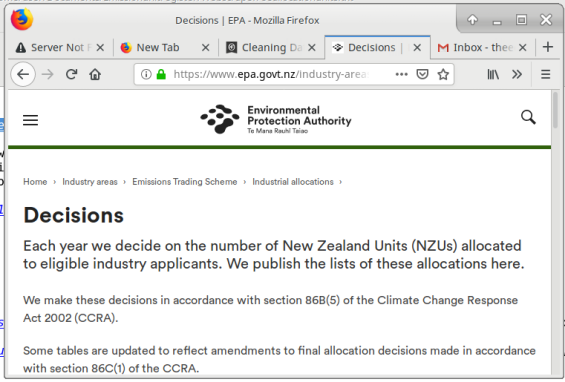 Here is the EPA webpage listing the final annual allocations from 2010 to 2018. 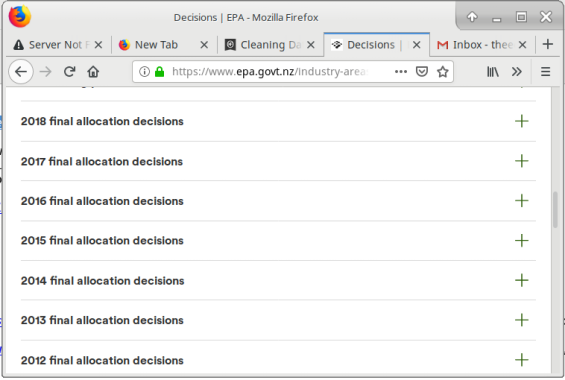 Okay, we need to scroll down and expand the tabs to see the data. 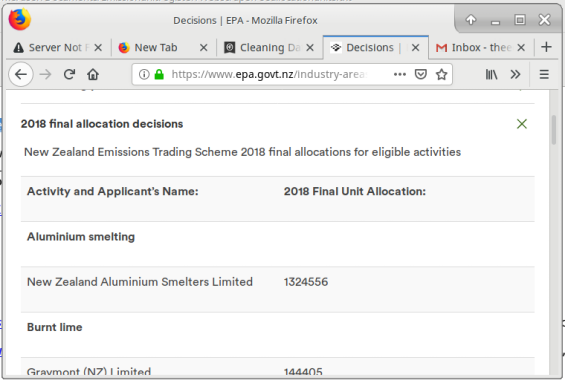 We see that the industrial activity of aluminium smelting always leads off. New Zealand Aluminium Smelters Limited received 1.3 million units for 2018. Alphabetical order is after all the text version of linear progression.

The EPA web site has a copyright statement saying that a Creative Commons International Attribution licence applies to their website.

And Section 86B subsection 5 "Decisions on applications for allocations of New Zealand units to industry and agriculture" of the Climate Change Response Act requires the EPA to publish the final allocation numbers for a calendar year "as soon as practicable" in the Gazette and on the EPA website.

The rule for tidy data is:

To obtain the data, I am going to repeat a 'webscrape' I have used before. I create a new google sheet. I insert the url of the EPA Industrial allocation decision webpage into cell 'A1'. I insert the text '=importhtml(A1,"table",1)' into cell A2. And the full table of the 2018 year unit allocation data appears in the sheet. 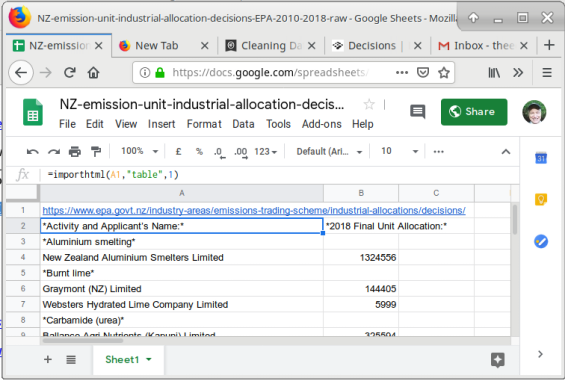 The next step will be cleaning the data stored in the google sheet to make it 'tidy' Then some data analysis. That can be a new post.