Here's a CBS 60 minutes documentary featuring James Hansen and the CEO of Duke Energy, the USA's third largest coal thermal power plant owner. The CEO says he totally accepts that carbon dioxide contributes to global warming. However, his plan is to phase out coal over 40 years.

CBS cuts to Hansen who of course says "No new coal fired power plants and a phase out must take place in 20 years or less". CBS goes back to the CEO and ask him how much Duke has invested in carbon capture and sequestration. The answer is nothing! 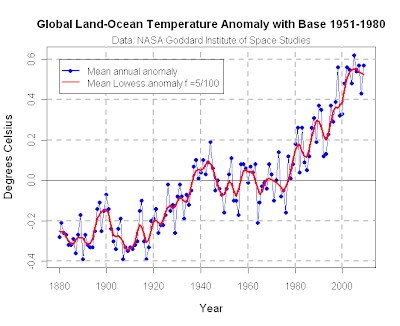 Is the world's average temperature warming? Yes, it is.

Here is a chart I have made with the R programme from the NASA Goddard Institute for Space Studies data.

The chart is a line plot of differences in annual land-ocean average temperature from the average for the base period 1951-1980 global mean temperature index, 1880 to present. The dotted blue line is the annual mean and the solid red line is the five-year mean, calculated with a Lowess function.