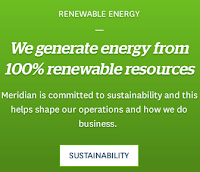 Meridian Energy has recently signed a contract with Genesis Energy to keep the Huntly coal thermal power station open for four more years instead of closing in 2018.

New Zealand has made some predictions of future reductions in emissions that we have confidently sent off to the United Nations Framework Convention on Climate Change (UNFCCC). Unfortunately Meridian's action has had the effect of sending the emissions savings up in a puff of coal smoke.

So I decided to divest from Meridian Energy and move my account to electricity supplier to Ecotricity who own only 100% renewable generation capacity and who are certified as carbon neutral. I used the Consumer Power Switch website. There is also the Whats my number web site.

I thought I should let Meridian Energy know I was voting with my account so I sent this open letter to Meridian Energy two weeks ago on 16 June 2016. I have not yet received a reply.

I consider climate change to be a serious risk that we are all morally obliged to respond to. In 2012 I deliberately chose Meridian as my electricity retailer because of it's 100% renewable generation.

I am aware that to some extent the electricity I consume inevitably draws on some fossil-fueled capacity due to the networked nature of the grid. However, I was satisfied that choosing Meridian as my retailer was the best I could do in terms of reducing carbon dioxide emissions as I would not be contributing my money to any fossil-fueled thermal generation. In the past four years I have been very happy with that choice and with the service I have received from Meridian. Unfortunately, I did not know that Meridian had a contract with Genesis to keep the Huntly coal thermal power station operating to 2018.

On 28th April 2016, Meridian Energy announced that it had signed a new contract with Genesis Energy that would keep the Huntly coal thermal power station operating for an extra four years. This contract therefore postpones the expected closure from the planned 2018 date to 2022. I have read the statement on the Meridian website explaining the contract as a means of reducing the risk of low levels in the hydro lakes. The explanation fails to take climate change seriously.

The Fifth Assessment Report of the IPCC sets out very simply the carbon budget consistent with limiting global warming to less than two degrees Celsius. The global warming we will experience will be linearly proportional to the cumulative volume of carbon dioxide emissions emitted by humanity. To prevent further dangerous levels of warming with a reasonable probability, cumulative emissions cannot exceed the carbon budget. At that point, emissions must not exceed net zero. 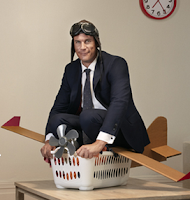 I find Meridian’s actions to be completely contrary to the IPCC's finite carbon budget conception of mitigation and with Meridian’s previous statements on renewable electricity. Those statements now appear very shallow and insincerely held to say the least.

Therefore, it gives me some satisfaction to inform you I am moving my electricity account to a 100% renewable electricity generator who has carbon neutral certification and who is not a party of the Huntly contract. It is my sincere wish that as many customers as possible who are concerned about climate change also leave Meridian.

New Zealand's state-funded public radio channel, Radio New Zealand, dedicated half an hour of music to the British referendum on leaving or remaining in the European Union.

The tunes showcased included 'Land of Hope and Glory', 'Wake me up before you go go' by Wham, 'Winner takes it all' by Abba. The final , I mean, the final tune for the half-hour 'sonic tonic' was the Sid Vicious version of 'My Way'.

I must admit I found the 'Sonic Tonic' a very amusing antidote to the news of a decision that will have very serious outcomes.

For example, here is Ed King writing on the referendum result on Climate Home. Midway through what’s set to be the warmest year in history, UK voters have elected to leave the world’s most progressive climate change alliance.

However, I did manage to tear myself away from Radio New Zealand and Youtube and I found something on the internet to feed the intellect. I dedicate David Dunning's 2014 article We are all confident idiots to the Leave Campaign. I should I be dedicating the Sid Vicious version of 'My Way' to them? 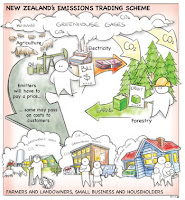 It would be good if we could compare actual company emissions under the NZ emissions trading scheme ("ETS") to the generous free allocations of units some entities receive. But we can't. It's half secret. So how will we ever know if allocations are excessive?

Someone recently asked me if there was enough publicly available information to be able to tell how the free allocation of NZ emission units to some privileged ETS participants under the NZ Emissions Trading Scheme related to the emitters actual emissions of greenhouse gases.

I replied "No, the data is not available". A response which, although it contains a grain of truth, still doesn't reflect the whole story. So this post is an attempt at that story.

In the past few years, I have written several posts about the significance of the free allocation of emission units to New Zealand Aluminium Smelters Limited, Norske Skog Tasman and New Zealand Steel.

In each case I concluded that the free allocations of units (including units for energy costs) were excessive. That these were cases of 'over-allocation'.

As I noted recently I have compiled a Google sheet of all units allocated to emitters from 2010 to 2014.

So good on the Environmental Protection Authority and the Ministry for the Environment. A while ago I made this pie chart of the 2011 allocations from the Ministry. Yes, awful rainbow colours, I know! But it still makes it clear that the vast bulk of free units get allocated to the top ten or so emitters - who happen to also be some of New Zealand's largest and most influential companies. 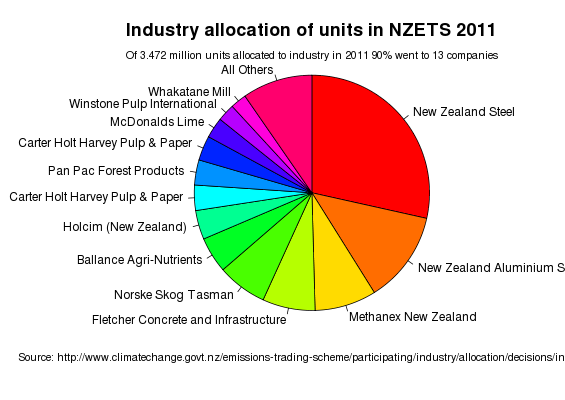 I was running out of emitters like NZ Steel and NZ Aluminium Smelters Ltd who both have unique operations. Both are the only example of their industry in New Zealand.

So I could look at 'category' emissions for 'aluminium smelting' and 'steel making from iron sands' in the Ministry for the Environment's greenhouse gas inventory reports and be confident the category emissions were the same as the company emissions.

So, back on 28 March 2013, I made a request under the Official Information Act (OIA) to the Environmental Protection Authority, who administer the reporting of emissions and surrendering of units in the ETS.

On 18 April 2013, the Environmental Protection Authority declined my request.

On 19 April 2013 I made a complaint about the EPA decision to the Office of the Ombudsman.

Almost a year later, on 8 April 2014, the Ombudsman concluded his investigation and said that the EPA were correct in refusing to give me the information as the Climate Change Response Act 2002 explicitly applies to the surrender of units in priority to the Official Information Act 1982.

The Deputy Ombudsman Leo Donnelly advised that he agreed with the EPA view that they did not have to provide the information on units surrendered. This is the key passage from his letter dated 8 April 2014.

I was bloody disappointed with that response. Here is the Ombudsman's letter. I also didn't know that the Official Information Act only applies if another statute allows it too. I will look at the relevant sections in detail.

(3) Except as provided in sections 50 and 51, nothing in this Act derogates from— (a) .... (b) any provision which is contained in any other Act of Parliament or in any regulations within the meaning of the Regulations (Disallowance) Act 1989 (made by Order in Council and in force immediately before 1 July 1983) and which (i) imposes a prohibition or restriction in relation to the availability of official information;...

So if another statute (or regulation) prohibits or restricts the availability of official information, then that statute or regulation applies irrespective of the Official Information Act.

Section 99 of the Climate Change Response Act certainly appears to prohibit the availability of information. It states;

So why does the Ministry for the Environment publish the annual allocations of units on its website? Why is the policy for unit allocation effectively open data (with complete public disclosure) when the policy for emissions and units surrendered in the ETS, the policy is 'Official Secrets Act?

The answer is the perfect bureaucrat's answer, because the Act says so.

Section 86B Decisions on applications for allocations of New Zealand units to industry and agriculture of the Climate Change Response Act states:

(5) The EPA must, as soon as practicable, after deciding an eligible person’s final allocation for an eligible activity in respect of a year,— (a) publish the decision in the Gazette; and (b) ensure it is accessible via the Internet site of the EPA.

Where does this leave us? It's the old story of the three-handed forestry consultant. 'On the one hand, on the second hand, but on the third hand..' Its great that the data on free allocation of units to emitters is fully disclosed. I am sure many of them wouldn't want that. However, without data on units surrendered and actual annual emissions under the ETS, no one can make much of an assessment of whether the units allocated are reasonable or over-allocated in terms of exceeding actual emissions. Transparency (and legitimacy) would be very much improved if the actual emissions and unit surrenders were just as open as the unit allocations

The Muttonbirds are a terrific band led by the indefatigable Don McGlashan in the 1990s.

Although Nature and The Heater are arguably better-known songs, this is the subtly disturbing 'White Valiant' played live in 1994.

Ah, that's great! I can't get enough! So here is the official video of 'Dominion Road', which was a single from their first album 'The Muttonbirds'.