My best mate, the Paramedic Media Star, is also strongly opposed to more mining in conservation areas. He has also written to the Government.

I am extremely concerned about the Prime Ministers statement to Parliament that the Government intends to make "significant changes to Schedule 4 of the Crown Minerals Act ... to increase economic growth and create jobs".

By definition the land covered by Schedule 4 is of the highest conservation values and includes National Parks - "...areas of New Zealand that contain scenery of such distinctive quality, ecological systems, or natural features so beautiful, unique, or scientifically important that their preservation is in the national interest." National Parks Act (1980).

The Prime Minister then stated incorrectly that only 40 square km of land is mined in NZ. That figure is straight from the website of the Minerals Association. The correct figure is over 200 square km (Parliamentary Commissioner for the Environment), not including the land area for access requirements in the form of roads. The fact that the Prime Minister has used an incorrect figure from an association representing private sector mining companies, rather than his own Commissioner, is telling.

The economic benefit of mining is a one off with an on-going cost of the environmental clean up. Contrary to the PM's assertion that it is surgical mining analogous to keyhole surgery, the vast majority of mining is not of this nature and the huge issue is pollution of waterways in particular. Tourism and the intrinsic worth are sustainable; extractive mining is not.

Pristine wilderness areas such as those covered by Schedule 4 can only diminish as the world demands more resources. New Zealand is one of the few countries with legislation permitting mining to occur in National Parks. This has tarnished our reputation amongst international conservation organisations. Indeed, Australia, our closest neighbour held up as wealthy because of its mineral resources, bans mining in National Parks.

As Minister of Conservation, what are you doing to up hold the National Parks Act, that " [National Parks] shall be preserved as far as possible in their natural state...in perpetuity for their intrinsic worth"?

Our company worked on the film Avatar which was mostly filmed at Peter Jackson's studios in Wellington. Avatar is proving to be one of the most popular and profitable films in history connecting with mass audiences all over the world. One of the keys messages in Avatar, as the bulldozers destroyed the pristine wilderness of Pandora to mine the precious mineral "Unobtainium", was -"can't you see - the real wealth doesn't lie underground, but above the ground - it is all around you (in the eco-system)."

It appears that the National Government is ignoring this message.

Johnny will no doubt also go on the list of people that John Key's office will advise to expect a considered answer from the hon Ann Tolley, the part-Minister of Education.
Posted by Robin Johnson's Economics Web Page at 1:28 PM No comments:

The International Union for the Conservation of Nature has also commented on what message is sent by New Zealand, a relatively wealthy country, considering resource extraction from areas set aside for conservation of biodiversity.

I guess John Key's office will advise both groups that they can soon expect a considered answer from the hon Ann Tolley, the part-Minister of Education.
Posted by Robin Johnson's Economics Web Page at 12:34 PM No comments:

I have just realised why John Key's private secretary has forwarded my email about mining in conservation areas to the Hon Ann Tolley, the part-Minister of Education.

It's to avoid conflicts of interest!

This has generated a few headlines.

Key steps into a political minefield.

Actually, I think this is a side issue to the main issue that Key and Brownlee are using factually incorrect information to argue for mining in conservation areas.
Posted by Robin Johnson's Economics Web Page at 11:53 AM No comments:

Russell Norman has the best Orwellian sound bites, like the Avatar bad guys

Russell Norman, the Green Party Co-leader, has the best one-liners on on Key and Brownlee's intention to open up more conservation areas to mining.

As John Key said "it is my expectation that the Government will ...make significant changes to Schedule 4" (the schedule of the Crown Minerals Act 1991 that prohibits mining in some conservation areas).

Recall that Key had said that the natural environment could be improved by the combination of more mining and a new conservation fund. In his address in reply speech, Norman described Key's language as 'Orwellian', that Key's logic was; In order to save the environment we have to destroy it.

Back in January, Norman compared Energy Minister Gerry Brownlee to the bad (mining) guys in the film Avatar, because of Brownlee's enthusiasm for mining conservation areas.

More cognitive dissonance from the PM's office about mining

I posted a couple of days ago about emailing the Prime Minister John Key to express my disapproval of more mining in conservation areas. Yesterday, I received this email from the PM's private secretary.

What else can you say but WTF? Since when is mining in conservation areas or Schedule 4 of the Crown Minerals Act anything to do with the Education portfolio or the hon Anne Tolley?

John Key, in his Statement to Parliament, sought to down play the footprint of mining and therefore to imply that mining of conservation areas was not such a big deal.

"Mining in New Zealand uses just 40 square kilometres of land, less than 0.015 percent of our total land area. The export value of that land however is $175,000 per hectare, which makes mining an extremely valuable use of land."

Key appears to be parroting Gerry Brownlee who has used the '40 square kilometres of mining' 'fact' in Parliament in mid September 2009.

So where does the statement "40 square kilometres of land, less than 0.015 percent of our total land area" come from?

I think Brownlee and Key must have got it from the mining industry. The website of the New Zealand Mineral Industry Association has this very similar statement on their website.

"Current mining activities area disturbing an area of less than 30 square kilometres and mine sites are being rehabilitated progressively."

While I read Key's speech, I immediately thought that 40km2 was far too small a footprint for all the mining in New Zealand and after 5 minutes on the internet I confirmed that 40 km2 significantly understates the mining area.On 21 October 2009, the Parliamentary Commissioner for the Environment, Dr Jan Wright, noted that there are 111 mining licences ( authorising 82 mines), that operate without resource consents. In other words, the existence of the mining licence prior to 1991 allowed the mining to continue without resource consent under the Resource Management Act.

Dr Wright's recommendation to the Government was that this was a loophole in mining and resource management law which needed to be closed so that the holders of the 111 licences were required to operate under resource consents with up to date monitoring and mitigation conditions. Dr Wright released a list of the 111 licences that showed that they cover a total licence area of 20,784 hectares (207.84 km2), of which 3,019 hectares are within conservation land (30.19 km2).

My values say to me that mining in conservation areas will have significant and irreversible adverse environmental effects. My experience in resource management backs that up. John Key and Gerry Brownlee are making statements of fact that are simply wrong to argue that mining is okay in conservation areas. This is transparently greenwashing and it says very little for their ability to fact check or to critically assess the viewpoint of the mining industry.
Posted by Robin Johnson's Economics Web Page at 2:26 PM No comments:

John Key's statement to Parliament proposes more economic growth through more mining in conservation areas. He states that mining uses only 40 square kilometres of land which is less than 0.015 percent of NZ's total land; that new mining will meet strict environmental tests and that increased mining will improve the natural environment via an "off-setting" conservation fund. I have included his words at the end of the post

I immediately sent this email to John Key. 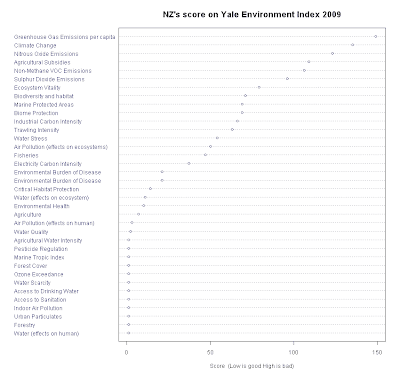 Rather than blog about it I thought I would graph it. Note that New Zealand is doing worst in all the climate change categories. That high score for agricultural subsidies, fourth in the list, is because the taxpayer is going to subsidise the agriculture sector under the NZ Emissions Trading Scheme.

To see or download the dotchart, it is on Wikimedia Commons.
Posted by Robin Johnson's Economics Web Page at 12:05 AM No comments: