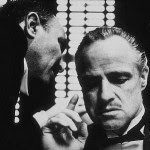 This post is sort of a 'review article' post synthesizing all my previous posts about New Zealand Aluminium Smelters Limited and how their overly generous free allocation of emission units under the emissions trading scheme shields them from a carbon price. NB as of 17/02/17 this post is in it's final form.

In each year that New Zealand has had an emissions trading scheme, the trans-national company New Zealand Aluminium Smelters Limited was given a very generous 'free allocation' of emission units. First, back in 2010, and in the years following and, in 2015 and, bringing us up to date, 2018.

I have written several blog posts about these free allocations. In the very beginning, back on 7 October 2011, I wrote 150% Pure Subsidy which was also posted at Hot Topic as 120% Pure Subsidy.

In that post I argued that New Zealand Aluminium Smelters Limited, the operator of the Tiwai Point aluminium smelter, was being 'over-allocated' emission units under the New Zealand Emissions Trading Scheme (the "ETS").

That allocation 'baseline', 2.556 units per tonne of production, exceeded the 'inventory' emissions factor in carbon dioxide equivalent (1.67 + 0.14 = 1.81) by a factor of 1.4. As indicated in this bar chart, which you could say represents a mental model of how the free allocation works. 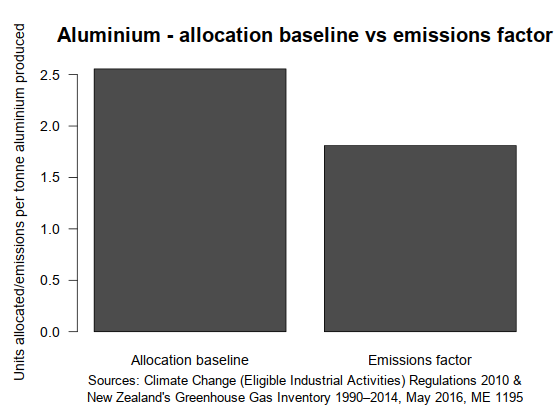 In that post, I was given feedback that the free allocation of units to emitting industries included extra units for "ETS electricity pass-through costs".

"The NZ ETS will increase the costs of generating electricity from fossil fuels and geothermal sources".

This was also explicit in the original Labour Government report "The Framework for a New Zealand Emissions Trading Scheme" of 2007.

It stated in the fourth bullet point to subsection '5.3.1 In-principle decision on levels of assistance through free allocation' (with my underlining), that;

For highly emissions-intensive trade-exposed emitters, the allocations would be based on actual production (i.e. an 'intensity' basis where allocation would increase if production increased) for the industry (Paragraph 14). The "90 percent" (of historic emissions) became a "90% level of assistance" (Paragraph 20) which then became an input to the formula for calculating the allocation number (Paragraph 32).

The 2010 Cabinet Paper "EGI Min (10) 14/9" established a proxy for the 'ETS electricity pass-through costs', the electricity allocation factor (to calculate ‘emissions’ per megawatt hour of electricity used, paragraph 8) as stated in paragraph 37:

An electricity allocation factor of 0.52 tCO2-e/MWh has been used to calculate proposed allocative baselines. This was the factor proposed in 2008 by the Stationary Energy and Industrial Process Technical Advisory Group (SEIP TAG) to offset the expected increase in electricity price as a result of the introduction of the NZ ETS. This factor was intended to reflect increases in electricity price to the end of 2012 and will need to be periodically updated.

So the counter argument is that New Zealand Aluminium Smelters Limited faces a carbon price through increased electricity costs rather than through the number of emission units surrendered for it's direct emissions. 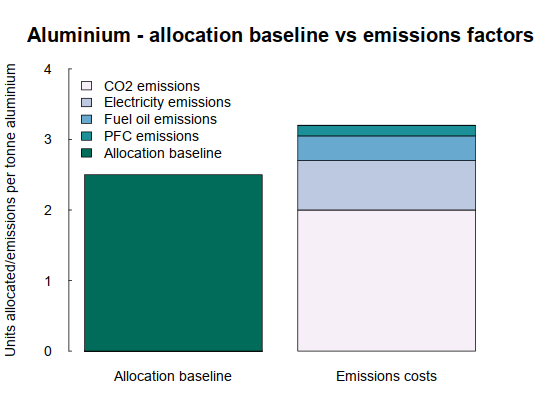 However, the bar chart isn't the last word. I just made up the numbers to show the idea.

Back in the mid-2000s, when the ETS was being developed, what else did we know about the New Zealand Aluminium Smelters Limited electricity contract with Meridian Energy?

We knew it was secret, controversial and far too cheap.

Brian Fallow also points out the pre-2013 contract exposed perhaps 10 per cent of the supply to the floating wholesale electricity price and that New Zealand Aluminium Smelters were very sensitive about the variability in wholesale prices when the hydro lakes had low storage levels.

The design of the generous free allocation regime moved the 'discounted' (but apparently still real) ETS 'carbon' price away from the direct emissions and to the ETS electricity pass through costs of an aggressive transnational company with the largest volume, cheapest and most secretive electricity contract in New Zealand. It would be harder to think of a policy more likely to result in regulatory capture (See Internet Archive) and rent-seeking.

There is one other important implication of upstream (ETS-related) energy costs being included in the 'allocation baseline'. The total allocation may well be greater than 100% of their direct emissions. But that doesn't matter if the emitter still faces some reduced electricity ETS cost pass-through.

As an example, there wasn't much doubt that New Zealand Steel's direct allocation of units exceeded their emissions liability.

As Jan Wright observed in her submission on the electricity allocation factor:

The critical questions are therefore "What are the extra costs to the smelter of thermally generated electricity caused specifically by the emissions trading scheme? How are these extra costs measured? Are the costs and method of measurement transparently disclosed?"

It's not classic cap and trade its a double-dip

Let's just be very clear that this idea of the allocation base including upstream ETS energy costs is conceptually a departure from the classic 'cap and trade' model of emissions trading. In strict cap and trade, with a real cap on emissions, and with 'grand-parented' free allocation of the 'capped' units to emitters, the energy sector would be allocated a share of the cap to reflect their direct emissions from energy generation. That allocation, being a part of the finite cap, could not go to both the energy companies with thermal fossil-fuel generation and to the 'downstream' industrial emitters.

But lets get back to the issue of the 'ETS electricity pass-through costs'. At the time of 120% Pure Subsidy: Part 2 I argued that it was a nonsense for the free allocation of units to a smelter to include a compensation factor for upstream carbon-intensive electricity costs, when that smelter owed it's existence to a dedicated source of hydroelectric generation from Lake Manapōuri. Also the generator the smelter contracts it's electricity from is the 100% renewable Meridian Energy.

The counter argument is that that the contract (or contracts) with Meridian prices some proportion of the electricity supplied at the whatever the wholesale price is at a point in time. And as explained by Brian Fallow, the wholesale price may include an ETS component when coal generation is setting the marginal price.

In that post, I argued that the then Minister for Climate Change Issues Nick Smith was incorrect in saying that New Zealand Aluminium Smelters faced a carbon price and that European aluminium smelters did not. Even though the European smelters were not (at that time) participants in the European emissions trading system, the (upstream) electricity sector was and therefore there was a carbon price passed 'downstream' to the smelters from the more carbon-intensive European electricity generators.

On 23 April 2012, I reported that New Zealand Aluminium Smelters Limited had won the 2011 Roger Award for being the worst transnational company operating in New Zealand.

On 11 September 2012, I riffed off a gangster meme and wrote the evocatively-titled Rio Tinto Alcan New Zealand Ltd plays godfather: nice aluminium smelter you got, be a shame if something happened to it, also at Hot Topic.

I noted that New Zealand Aluminium Smelter Limited was again threatening to close the smelter and in effect saying "Shame if something happens to" the smelter workforce, the Southland economy, the New Zealand electricity market, Meridian Energy and the conservation program for the critically endangered kakapo.

For a couple of years, I didn't really think about smelter until I looked at the Official Information Act releases by the NZ Treasury about the New Zealand Government's payment of $30 million to New Zealand Aluminium Smelters Limited in 2013.

Amongst the dozens of documents was an email between officials with a familiar title which made me laugh; Email to Officials: Rio Tinto Alcan NZ Plays Godfather: Nice Aluminium Smelter you got, be a shame if something happened to it.

In this email, one official noted to another that Meridian Chief Executive Mark Binns had emailed them asking if the electricity costs mentioned in my Hot Topic blog post were correct and that yes the numbers were correct!

Another couple of years went by. As they tend to. Then, on 9 April 2016 of this year, I wrote Opening up the data on emissions units in the NZ emissions trading scheme. In that post I noted with some surprise that the updated data on free emissions unit allocations showed that New Zealand Aluminium Smelter's 2013 allocation had increased by a factor of five from the 2012 allocation. And of course I made a bar chart. 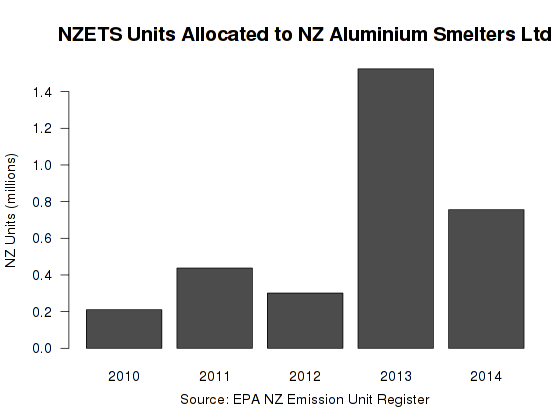 What happened was that the 2013 allocative baseline for aluminium production changed from 2.062 units per tonne to 10.441 units per tonne. As you can see from this bar chart. 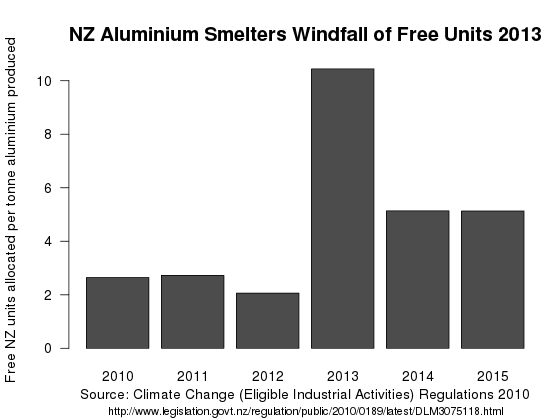 Wrapping it all up

In hindsight, it's obvious from the June 2010 Cabinet paper Industrial Allocation under the New Zealand Emissions Trading Scheme: Group One Activities, Ref no: EGI Min (10) 14/9 that although there was a generic 'electricity allocation factor' of of 0.52 tCO2-e/MWh, that would not apply to New Zealand Aluminium Smelters Limited.

They would instead have a 'bespoke' arrangement for the electricity component of the allocation baseline.

This apparently involves an annual "reading" of the highly confidential ultra-cheap electricity supply contract with Meridian. There are a number of potentially ambiguous statements about how this is done.

"I have since used my powers under section 161D of the Act to request electricity contracts and related information from NZAS. [Deleted] In particular the analysis suggests:

So it's not just a matter of reading the contract. There is also "related information" from New Zealand Aluminium Smelters Limited. There is also an "analysis". This "analysis" suggests that actual annual pass-through electricity costs vary from year to year and may be more or less than than the electricity allocation baseline. However, in spite of this variability, the average pass-through electricity costs for the years 2010 to 2012 is known (but has been deleted to keep it confidential) and is less than 0.52 tCO2-e/MWh.

Paragraph 9 of the Executive Summary states a fairly firm conclusion;

"Information obtained from New Zealand Aluminium Smelters Limited (NZAS) enables electricity pass-through costs that NZAS faces for 2010 to be determined with reasonable certainty at this point."

So, in conclusion, the Ministry for the Environment has set up a regulatory process where New Zealand Aluminium Smelters Limited is enabled and encouraged to annually provide the Ministry with "related information" and "analysis" of the electricity contract - in order to set the allocation baseline and therefore the number of free units they will be allocated. And this information analysis is not disclosed. It's hard not to conclude that this bespoke process allows New Zealand Aluminium Smelters to annually nominate it's preferred free allocation of emission units.