Norwegian Wood and newsprint transnational Norske Skog Tasman (NZ) Ltd 'exports itself'. Mr February looks at the flight of another manufacturer and CO2 emitter and exporter as it lays off staff and reduces production. Wasn't the very generous free allocation of units in the NZETS meant to keep exporters like Norske Skog Tasman in New Zealand? Or have we just removed the price signal from exporters for no valid reason and stuffed the NZETS?

The other week Gareth tweeted about a good article in the Herald by Chris Barton.

Chris Barton reported that the Norwegian-owned newsprint-maker and transnational Norske Skog Tasman NZ had joined the ranks of export businesses like Rio Tinto Alcan NZ/NZ Aluminium Smelters who are exporting jobs off shore.

Norske Skog is shutting down one of two newsprint machines at the Tasman Mill, in Kawerau, due to lowered demand for newsprint.

At the same time Norske Skog is building a new $A84 million plant in Tasmania with some substantial help from the Australian Federal government (A$28 million grant) and State government (A$13 million loan).

Chris Barton noted some strong questions asked of the Government such as "what is being done for jobs"? And strong criticisms of the Government's naive "market will take care of everything" approach.

So that prompted me to look at how Norske Skog Tasman NZ fits into the NZETS. What are the greenhouse gas emissions of the Norske Skog Tasman pulp mill? Is Norske Skog Tasman regulated by the NZETS? Have they ended up with a large free allocation of emission units (like NZ Aluminium Smelters Ltd) ostensibly to protect their international competitiveness and to keep the jobs in NZ?

Norske Skog Tasman uses geothermal steam from the Kawerau geothermal field for heating and electricity generation in its newsprint mill. Geothermal steam naturally contains carbon dioxide and methane which are released when the heat energy is transformed.

The use of geothermal steam for energy is covered by the NZETS as an energy sector emission. So Norske Skog Tasman must report its greenhouse gas emissions and obtain and surrender emissions units.

There is a specific emissions factor in the Climate Change (Stationary Energy and Industrial Processes) Regulations 2009 for Kauwerau's geothermal steam. The factor is 0.0275 tonnes CO2-2 per tonne of geothermal steam used.

Norske Skog Tasman's production of newsprint is included as an emissions-intensive trade-exposed activity eligible for a free allocation of 0.4911 emission units per tonne of uncoated newsprint, at the highest level of assistance; 90%.

So far, so much like NZ Aluminum Smelters/Rio Tinto Alcan NZ.

Let's start with a 'back of envelope' calculation of the units Norske Skog Tasman should surrender (the NZETS gross carbon price).

According to the Kawerau Geothermal Field Background Study, Mighty River Power supplies 285 tonnes of geothermal steam per hour to Norske Skog Tasman, who on-sell 26 tonnes to Carter Holt Harvey Wood Products. So net use is 259 tonnes per hour.

However, I might not have the right numbers. My calculation may be wrong. Why don't I ask the Environmental Protection Authority under the Official Information Act for the exact number of units surrendered by Norske Skog Tasman. Watch this space. 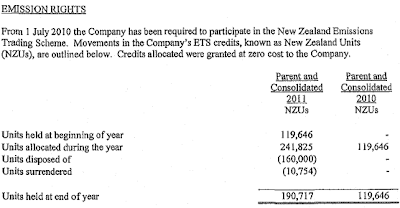 The electricity allocation factor has also been the subject of a consulation process and there is an emitters contact group for it as well.

According to the Kawerau Geothermal Field Background Study (PDF), Norske Skog Tasman and Mighty River Power (MRP) have "..a power purchase agreement whereby NST (Norske Skog Tasman) contracted to take a majority of MRPs generation. Due to the fact that MRPs plant is grid tied, this is effectively a financial agreement offering NST price certainty and MRP a customer contracted to take the majority of supply."

To conclude the free allocation part of the analysis; in the example of Norske Skog Tasman, the NZETS free unit allocations are not just a discount of the full NZETS carbon price, the allocations are a transfer of substantial corporate welfare. The units allocated exceed the units they have to surrender by an estimated factor of 22.

And in terms of protecting the international competitiveness of Norske Skog Tasman and keeping jobs in New Zealand, the free allocations have not made the slightest difference. Thats in spite of National Party scaremongering back in 2008 that the NZETS would cause the mill to close. And Catherine Beard of Business New Zealand (formerly boss of the Greenhouse Policy Coalition) still scaremongering in October 2012 that any real cap in the NZETS will cause more job losses Talk about slamming the stable door after the horse has bolted.

Lets look at the real factors affecting whether a commodity manufacturer stays in New Zealand.

If you are a transnational like Norske Skog, you always have the choice of playing off more than one jurisdiction. The country with the smaller economy, like New Zealand, can't match the money of a larger economy like Australia. If Norske Skog had not purchased the Tasman Mill from Fletcher Challenge in 2000, this 'regulatory arbitrage' would not be possible.

Incidentally, Rio Tinto Alcan shares most of these international commodity trader issues; the over-priced debt-funded purchase of Alcan and Comalco by Rio Tinto before the GFC, the Rio Tinto's plan to sell Pacific Aluminium (including NZ Aluminium Smelters Ltd), the low demand for aluminium from the stagnant economies of the Eurozone and the USA and the price and supply competition from Chinese smelters in the huge and growing Chinese market.

Imagine a fictional conversation between John Key and the CEO of Norske Skog.

"So, Yon, you don't mind if I call you Yon? For the Tasman Mill, you kiwis are all online, the demand for newsprint is down. You give me quarter of million of these NZ units that are worth $NZ3 each. No other ETS accepts them. Thats pretty low quality carbon credit, Yon. Now, Yulia Gillard, she gives us $A28 million for new plant at the Boyer mill in Tasmania. Can you match that, Yon? Can you?"

That is the bottom-line, isn't it? New Zealand could never have matched $A28 million, either as a direct grant, or through manipulation of the NZETS free allocation provisions.

To me, the Norske Skog Tasman job losses are a good demonstration of how futile it was to have an NZETS designed mainly to completely avoid any carbon price on transnational exporters. The carbon price has not just been reduced or discounted to Norske Skog, the sign has been reversed so that its an off-balance sheet transfer of corporate welfare to them in the form of emission units. Such transfers are no doubt sought by local managers who are rent-seeking, but they will be irrelevant to the international commodity trade movements that will ultimately determine whether these transnationals stay or go.