New Zealand's new Minister for Climate Change Issues, Paula Bennett, has just confirmed New Zealand will be "carrying forward" 127 million "Hot Air" emissions units (or offsets) under the Kyoto Protocol rules. These units mostly do not represent a tonne of carbon dioxide equivalent reduced somewhere else and yet the Government intends to use them to allow New Zealand's greenhouse gas emissions to continue to increase.

On Thursday 17 December 2015, Ms Bennett released a statement stating that New Zealand had met it's 2008 to 2012 Kyoto Protocol emissions reduction target and was well on the way to meeting the 2013 to 2020 target.

The Minister's statement linked to four reports on the Ministry for the Environment's website;

In two scathing posts No Right Turn assesses the dubious use of the Ukrainian and Russian units derived from coal stockpile projects; Climate change: A policy based on fraud and Climate change: How bad is New Zealand's climate fraud?.

My previous estimate of the amount of surplus units was 86 million units. The reports confirm 127 million units. I did a back-of-envelope calculation to relate the numbers of units cancelled (to match 2008 2012 emissions) and the numbers left over as 'surplus' which may be carried forward. 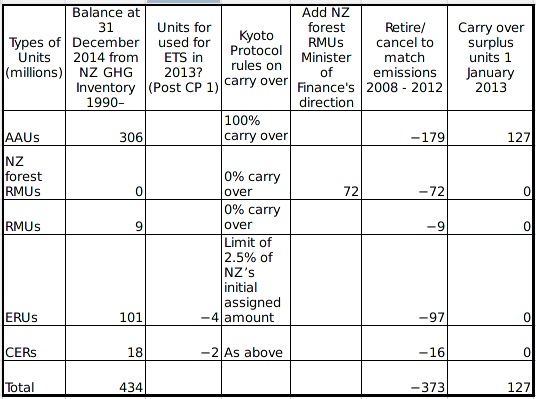 Manipulating accounting rules like this, so that an adverse trend is systematically misrepresented is as it's opposite, a positive trend - is the text-book definition of creative accounting. I agree with No Right Turn that this is another example of New Zealand's completely unethical climate change policy.